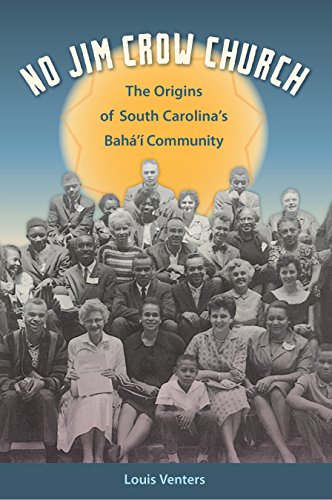 "A richly detailed study of the rise of the Bahá’í Faith in South Carolina. There isn’t another study out there even remotely like this one."--Paul Harvey, coauthor of The Color of Christ: The Son of God and the Saga of Race in America

"A pioneering study of how and why the Bahá’í Faith became the second largest religious community in South Carolina. Carefully researched, the story told here fills a significant gap in our knowledge of South Carolina's rich and diverse religious history."--Charles H. Lippy, coauthor of Religion in Contemporary America


The emergence of a cohesive interracial fellowship in Jim Crow-era South Carolina was unlikely and dangerous. However, members of the Bahá’í Faith in the Palmetto State rejected segregation, broke away from religious orthodoxy, and defied the odds, eventually becoming the state’s largest religious minority.

The religion, which emphasizes the spiritual unity of all humankind, arrived in the United States from the Middle East at the end of the nineteenth century via urban areas in the Northeast and Midwest. Expatriate South Carolinians converted and when they returned home, they brought their newfound religion with them. Despite frequently being the targets of intimidation, and even violence, by neighbors, the Ku Klux Klan, law enforcement agencies, government officials, and conservative clergymen, the Bahá’ís remained resolute in their faith and their commitment to an interracial spiritual democracy. In the latter half of the twentieth century, their numbers continued to grow, from several hundred to over twenty thousand.

In No Jim Crow Church, Louis Venters traces the history of South Carolina’s Bahá’í community from its early origins through the civil rights era and presents an organizational, social, and intellectual history of the movement. He relates developments within the community to changes in society at large, with particular attention to race relations and the civil rights struggle. Venters argues that the Bahá’ís in South Carolina represented a significant, sustained, spiritually-based challenge to the ideology and structures of white male Protestant supremacy, while exploring how the emergence of the Bahá’í Faith in the Deep South played a role in the cultural and structural evolution of the religion.